A virtual meeting of the South Asian Olympic Council was held today, hosted by the Pakistan Olympic Committee under the Chairmanship of Lt. Gen (R) Syed Arif Hasan, President South Asian Olympic Council (SAOC) and President Pakistan Olympic Association. The meeting was held in a virtual mode due to travel restrictions amidst COVID – 19 and the fact that all the countries of South Asia would be travelling soon for participation in the Tokyo Olympics. Holding this meeting was necessary so that the members could be briefed as to the plans and preparation for the 14th South Asian Games  The Council’s meeting was attended by the Presidents / Secretaries General of SAOC countries to discuss various matters:-

SAOC unanimously expressed solidarity with the victims of the Covid – 19 and also took the opportunity to appreciate the commitment of all the personnel providing services for the safety of everyone in these testing times. President SAOC reiterating the resolve of IOC stated that we will come out of these difficulties time stronger together.

The Council was briefed regarding the forthcoming 14th South Asian Games allocated to Pakistan in particular the cities, dates and sports programs for the Games. The Council was informed that the concept of the Games has been approved by the H.E. Imran Khan, Prime Minister of Pakistan. The Council was delighted to note that Pakistan will be hosting Games at Lahore, one of the most historical cities of the Sub Continent.  President SAOC appraised the Council that certain sports will be held in other cities including Faisalabad, Gujranwala, Islamabad and Sialkot. The Council appreciated the idea of holding the Games at various cities thus not only enabling a larger crowd participation and greater interaction within the people of South Asia but also more development of infrastructure in a larger number of cities. The Council agreed to initiate the process to finalize the 25 +2 sports to be part of the 14th South Asian Games. The Council also endorsed the proposal to hold the Games in March, 2023. The proposal to host a venue inspection by the South Asian NOC’s in the last quarter of current year (2021) was agreed with by the SAOC colleagues. SAOC friends assured their complete support and cooperation for the successful conduct of the 14th South Asian Games Pakistan in March 2023. They appreciated the high quality organisation capability of NOC Pakistan which was seen during the 9th SAF Gamesand were convinced that this time round it would be even better.

In the end, President thanked the members SAOC for their overwhelming support and wished all the athletes and officials a successful and safe participation in the Tokyo 2020. 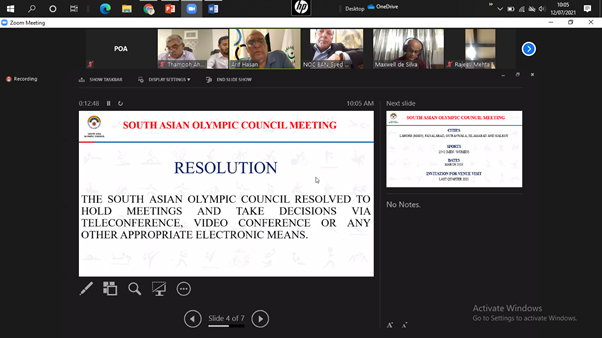 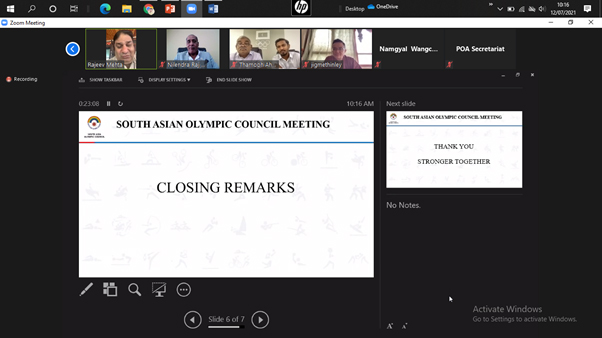